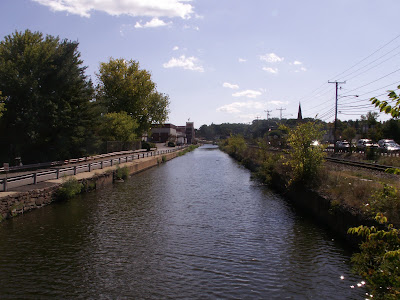 The Windsor Locks Canal is a very unique feature of the community with an amazing history. A major initiative for Main Street revitalization is to once again open up viewsheds of this historic canal and possibly find access to its southern end. A 4.5 mile bike/walking trail exists from just north of the 140 Bridge leading to just short of the 190 Bridge in Suffield. Check out these links:
American Canal Society listing
Department of Environmental Protection - Windsor Locks Canal State Park Trail
The Irish Connection
Order local author Maria Giannuzzi's photo history book of the canal
Posted by EIDC at Tuesday, November 03, 2009 No comments: 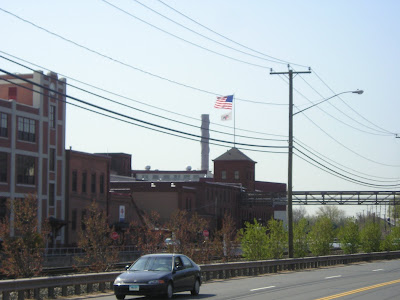 The Ahlstrom Corportation has a major presence in downtown Windsor Locks. Ahlstom which succeeded the Dexter Corporation in operating a manufacturing facility on the banks of the Connecticut River and along the Windsor Locks Canal has made substantial investments in their plant in the last several years and is one of Windsor Locks' major employers. Several of the recommendations in the Windsor Locks Main Street Master Planning Study and subsequent planning efforts include items relevant to Ahlstrom. For instance, it is recommended that some additional study be done regarding extending the Windsor Locks Canal State Park Trail through the Ahlstrom complex. A vegetation management plan is currently being developed by Ferrero-Hixon and Associates to try and open up more views of the Connecticut River, Ahlstrom and the Windsor Locks Canal. It has also been suggested to utilize the utility bridge to install a Windsor Locks sign. Meetings have been held with Ahlstrom officials who are eager to engage in the community. Several Ahlstrom employees have participated in Main Street clean-up efforts.
Posted by EIDC at Monday, November 02, 2009 No comments: 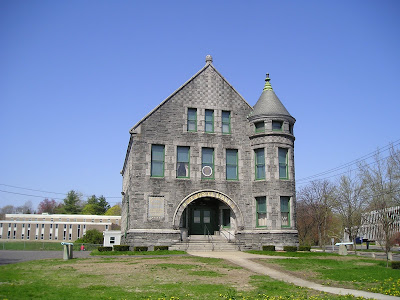 Memorial Hall is a beautiful structure and an asset to Windsor Locks Main Street. The building could be a catalyst for revitalization of the downtown area. For information on the history of this significant building visit http://www.chs.org/ransom/134.htm.